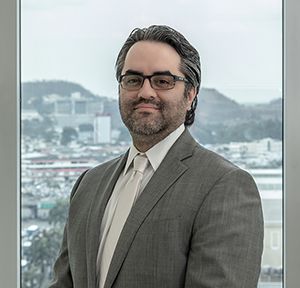 Founder and President of AB&A, Mr. Arosemena is one of the most well-known Intellectual Property attorneys in the country, having led the development of the IP field in Guayaquil (the biggest city of Ecuador and its "economic capital") through more than fifteen years of specialized practice. He has both an “Attorney at Law” and a “Specialist in Intellectual Property Law” degrees from the Catholic University of Guayaquil, and a Master of Laws (LL.M.) degree from Georgetown University.

Mr. Arosemena also obtain a "Specialist in Intellectual and Industrial Property" degree from the Catholic University of Guayaquil (UCSG), with the thesis "The Trademark Nullity Procedure under Andean Community Law".

Mr. Arosemena worked as an "International Legal Specialist" in the New York office of Winston & Strawn, LLP, participating in international cases dealing with legal issues resulting from the interaction of the Common Law and Civil Law systems.

Law School Director of the International University of Ecuador (UIDE) in Guayaquil.

He was the first attorney in Guayaquil to be included among the leader practitioners of Intellectual Property in the rankings World Trademark Review (WTR) and Chambers and Partners.

He is the author of the book “Right of Author for Authors and Executives” (IEPI, 2011). 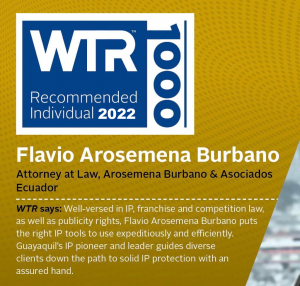